Laying The Keel for the Power Squadron of New Haven

During the summer of 1912, the benefits of power boating came full circle, when, on the annual Boston Yacht Club cruise to Portland, Maine, twenty members of the power boat division set sail with forty sailboats. During this cruise, the power boaters cruised in formation and demonstrated an elaborate system of maneuvers executed by means of flag signaling. While at sea, a Nor'easter unexpectedly blew up, disabling many of the sailing vessels. While under Roger Upton's command, the power boaters went to the rescue of their sailing counterparts and towed the disabled vessels to safe harbor. No losses were reported. The September 1912 issue of Motor Boating Magazine reported the incident with a six page photo story. Needless to say, the event dispelled any negative views held by sailing members of the Boston Yacht Club and proved the practicality of recreational motorboats. 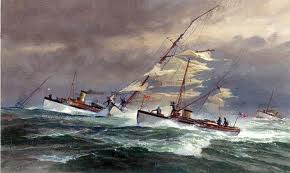 On October 14, 1912, R/C Roger Upton petitioned the Executive Committee of the Boston Yacht Club to officially establish his Power Boat Division. The committee unanimously granted Upton's petition. At the Boston Yacht Club's annual meeting in January 1913, the Power Boat Division was officially recognized and its name was changed to the Power Squadron.

The names of the officers and rules of the new organization were published in the 1913 edition of the Boston Yacht Club Yearbook. The officers were: Roger Upton, commander, C. N. Burnell, lieutenant commander, and Nathaniel L. Stebbins, secretary. 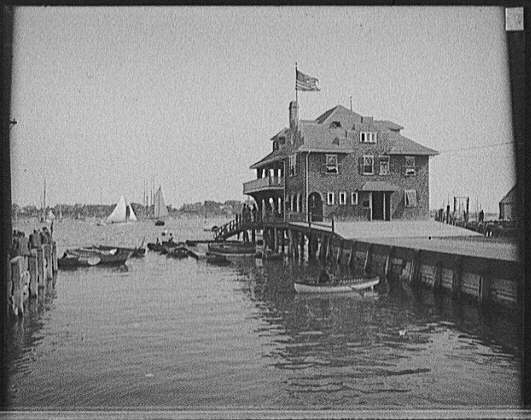 In the winter of 1913-1914, a circular letter by Roger Upton, describing the activities of the Power Squadron of the Boston Yacht Club, was received by many East Coast yacht clubs. He was suggesting that these clubs send delegates to a meeting in New York to consider the matter of organizing other Power Squadrons, all to be grouped under a central organization. It had been decided that from the New Haven area Frank S. Cornwell, Osborne A. Day, and John K. Murphy were to be the Examining Board for this new district, if they should prove qualified.

Sometime after this meeting in New York, Nathaniel L. Stebbins, an officer serving under Roger Upton in Boston, met with the three men at the Union League Club in New Haven. All three men were former Naval Officers or Naval Militia and passed a fairly detailed exam. They, in turn, examined applicants for membership in the Power Squadron of New Haven, as it was then called. Twenty-four men from four area clubs (the New Haven Yacht Club, the Waucoma Yacht Club, the City Point Yacht Club, and the Volunteer Sailing Club), whose names appear on the original charter dated April 25, 1914, established the new unit. The Power Boat Squadron of New Haven, was born, under J.N. Champion, Commodore, to become what is now the oldest continuously chartered squadron in USPS.